The Intercultural Community Center and Special Collections have partnered to create a virtual Belonging in the Academic Commons exhibit for Latinx Heritage Month. This collection centers the lives of LGBTQ+ Latinx people living in Los Angeles from the 1970s through the 1990s. We initially intended for this project to highlight Occidental students, but found that official sources such as The Occidental were sorely lacking. Instead, the following images were cultivated from a variety of other digital sources in order to give viewers a sense of what LGBTQ+ Latinx communities have historically looked like in Los Angeles. We intend for this to be a mere glimpse into this history, and hope that it serves as a jumping off point for further education. We consider it an evolving exhibit to be built upon through this academic year. 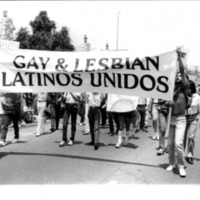 While the line between activism and art is often blurred, this collection features images related to specific activist groups. 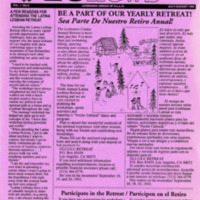 A newsletter from Lesbianas Unidas detailing their upcoming annual retreat. 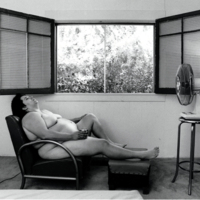 A self portrait of queer Chicana artist Laura Aguilar. Much of her work explored her identities as a "large-bodied, working--class queer Chicana… 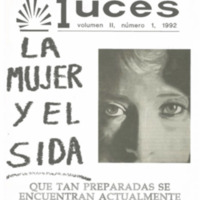 Luces Revista was a Spanish-written magazine from the 1990s for queer Latinas. This issue contains resources and information about A.I.D.S.